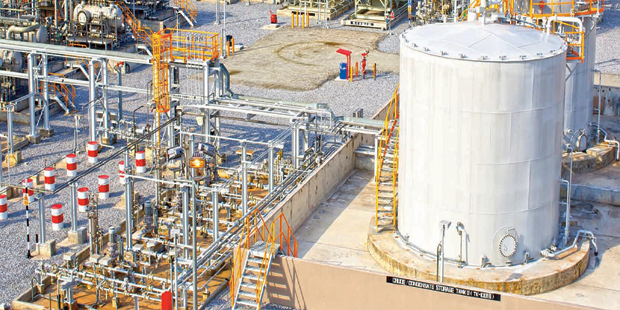 Goodluck Jonathan, the Nigerian president, is scheduled to commission the Uquo Gas Processing Facility, in Eket, in the south east onshore Niger Delta, on Thursday, August 14, 2014.

The plant is located on the Uquo Gas Field in the Oil Mining Lease (OML) 13 in Akwa Ibom State. Uquo is one of the 24 marginal fields awarded to 31 Nigerian companies by the Nigerian government in February 2003. It will be the first upstream petroleum field development project by a Nigerian independent that the Head of State is commissioning.

The Two Hundred Million Standard Cubic Feet per Day (MMscf/d) capacity gas processing plant flamed to life in December 2012, the first of the marginal fields to be developed as a gas project. It commenced the contracted supply of gas to the Ibom Power Plant in Ikot Abasi in December 2013. Turbine faults at the Ibom Power Plant caused the one year delay between the on stream date of the processing plant, and commencement of gas delivery to the power plant. Uquo Gas Field holder and operator, Frontier Oil and its technical and financing partner Seven Energy, have a 10 year contract to supply 43.5MMscf/d of the gas to the Ibom Power Plant in Ikot Abasi as well as a 20 year contract to supply 131 MMscf/d to the federally-owned power plant at Calabar. As the president is commissioning the plant on August 14, the partners are moving in a rig to complete two gas producer wells on the field, collectively capable of flowing 80MMscf/d and drilling two more producers.

The 191MW capacity Ibom Power Plant is only receiving, for now, 24MMscf/d, slightly more than half of the 43.5MMscf/d of gas that the Uquo plant is contracted to supply, because the Power Plant, run by Ibom Power, a state government firm, is not operating at full throttle. Neither Frontier Oil nor Seven Energy would comment on the price of gas agreed in the contract, but impeccable sources in the Akwa Ibom state government say it is $2 per thousand cubic feet.

Goodluck Jonathan is expected to be at Eket with his minister of petroleum, Diezani Allison Madueke, regarded as the most powerful Nigerian minister of the country’s 15 year old democracy. His host is Godswill Akpabio, governor of Akwa Ibom State who sees this industrial project by a Nigerian company in his state as something of a personal achievement.